6 Health Benefits of Beets You Didn’t Know About 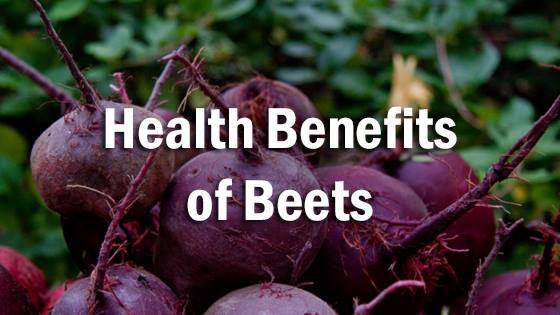 Though they haven’t achieved the sinfully delicious status of potatoes, and they lack the child-friendliness of carrots, beets have earned an important place in a nutritionally balanced human diet. Sadly, it’s not a vegetable the vast majority of us are exposed to growing up, and so many people see it only as the strange shiny substance extracted from a can which now lurks, neglected, at the corner of the salad bar at their local pizzeria. We tell ourselves that we’ll slip it in under a piece of tame, innocent-looking spinach, but since we’re unsure of whether or not it will interfere with the not-so-delicate taste of our dressing of choice, we figure it safer to take a pass. In fact, most of children eating the standard American diet recognize the noble beet only as the gelatinous purple vegetable masquerading as cranberry sauce.

Okay, maybe that last one was just me. 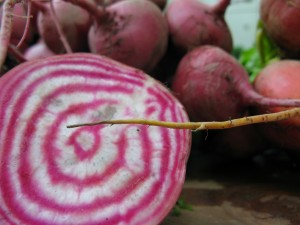 If you’ve never encountered beets outside the pizzeria salad bar, you may be surprised to know that they are not canned goods created in a lab—far from it! Just like turnips and carrots, beets are root vegetables, and they are far less intimidating when you have the opportunity to see them in their natural, pre-diced and canned form. Most beets are dark red or purple in color, but they also come in yellow, white, and even candy-cane. Pulled straight out of the ground, beetroots are gorgeous vegetables, and were an important ingredient throughout history in kitchens around the world.

In 800 BC, beets were said to flourish in the Hanging Gardens of Babylon. Medieval cooks made heavy, starchy pies using beets. Brits in the Elizabethan era, who considered themselves more refined, used them in stews, tarts, and perhaps most notably, makeup. The bright red pigment found in beets was widely used to stain ladies’ lips and cheeks; while it may not have done their health much good sitting smudged on their faces, it certainly helped them in the beauty department!

Though Europe loved eating this vibrant root in the Middle Ages, the ancients cultivated the plant for different reasons: to eat the bright green leaves and stalks, which they ate like chard. While beetroot doesn’t grow naturally until the autumn temperatures set in, the Romans were big enough fans of the vegetable to come up with labor-intensive farming methods which allowed them to grow it in the hot summer months. This was probably because most cultures at the time believed it to have strong aphrodisiac properties—according to ancient Greeks, Aphrodite regularly consumed beets to enhance her sex appeal.

Finally, in the 1500s, parts of Europe began cultivating the plant to eat its root, and selective breeding resulted in the bulbous, turnip-shaped beet we eat today. Being one of few vegetables which thrived in the bitter cold of winter, it quickly became a dietary staple in the northeastern part of the continent.

What earned the beetroot its firm place in the heart and soul of humanity was, of course, our sweet tooth. In the year 1747, German chemist Andreas Sigismund Marggraf came up with a way to extract sucrose—table sugar—from beets. The Prussian king later provided subsidies for the sugar beet industry, and several centuries later, a whopping 20% of all the sugar in the world today is made from beets.

But the beetroots are good for more than satisfying your sweet tooth or giving you luscious red lips. Whole beets have a whole host of health benefits that can be difficult to get elsewhere. Here are just a few:

The current science suggests that much of the devastating illness that runs rampant today is caused, or at least exacerbated, by chronic inflammation. High levels of inflammation can cause aches and pains, fatigue and depression, in addition to sometimes worsening the symptoms of things like heart disease and diabetes. Beets contain high levels of a chemical called betaine, which has been shown to correlate with a decrease in at least three inflammatory markers. 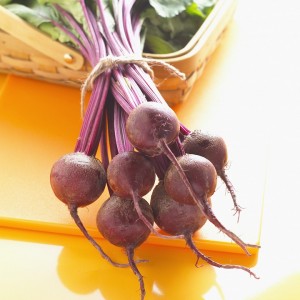 While long-term lifestyle changes are needed for big, lasting results, beets have an immediate effect on resting blood pressure—in one study, men who drank beet juice experienced a systolic blood pressure drop of five points. This is thought to happen as a result of the high level of nitrates found in beet juice, which the body converts to nitric oxide. Nitric oxide is a chemical which relaxes the blood vessels and allows for increased blood flow.

While some athletes have claimed that beetroot helped with exercise and recovery for years, one recent study has provided those claims some credibility. In this study, researchers compared the exercise performances of individuals who participated in heavy resistance training, either using a nitrate-rich supplement derived from beetroot, or a nitrate-poor placebo. While their performances were not measurably different, their oxygen consumption was. The researchers concluded that beetroot may improve muscular efficiency during exercise.

Like most whole plant foods, the high vitamin and mineral content of beetroot aids in providing a sense of happiness and overall well-being. As a bonus, they contain tryptophan, the chemical famous for keeping you mellow and happy after Thanksgiving dinner. 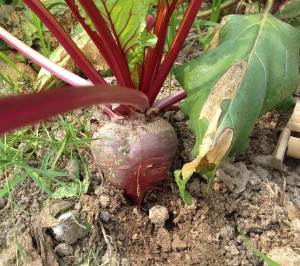 Berries aren’t the only option for anyone looking for the health-bolstering benefits of antioxidants. In addition to betaine, beets have high levels of vitamin C, the more famous antioxidant. They also have plenty of manganese, potassium, and folate. This means that they are perfect for fighting cancer, reducing symptoms of chronic illness, and lengthening life.

Anyone who has gone from eating white bread to eating potatoes or peas can attest to the amazing, appetite-satiating powers that come with eating whole plant foods. Though beets are a little on the carbohydrate-rich side (they are starchy vegetables), they are also overall low in calories and high in fiber, which prevents blood sugar spikes and creates a feeling of fullness.