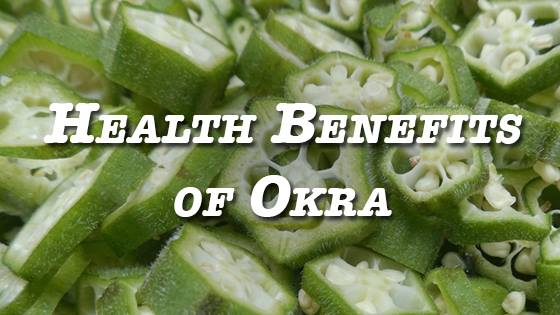 Okra, which is in the same family as hollyhock, is a green seed pod which grows to roughly seven inches in length. It grows on sun-loving plants with white flowers, which grow to about six feet tall. Okra is an annual vegetable, which means that the plant can produce its own seeds within a year after it is planted.

Otherwise known as lady’s fingers, this relative of hibiscus was originally cultivated in Africa– specifically, somewhere around modern-day Ethiopia. We know that it was grown by the Ancient Egyptians in as early as 1200 B.C., and that it quickly spread all throughout the Middle East and the African continent. However, okra did not reach the American continent until much later (sometime in the 1700s, to be exact), when it was brought over along with slaves who were shipped in from West Africa. It is thought that these slaves showed the Creole peoples in Louisiana how to use the versatile plant as a thickener in stews and soups, which is why the nonnative vegetable has become a mainstay in Creole cuisine.

In ancient times, Egyptians cooked and ate the seed pods. The individual seeds themselves received a slightly different treatment: they were lightly toasted, then ground up to be used as a substitute for coffee. Today, okra is consumed all over the world, and its popularity in the United States has skyrocketed as more and more health-conscious people become aware of the plant’s countless benefits. This is particularly true in the south, where an interest in local foods has led to increased sales of locally-grown okra. Okra can now be found in most supermarkets, farmer’s markets and local grocery stores around the country.

Okra releases a thick, viscous, gelatin-like substance when cooked, which many use as a thickener in stews (like the Creole people once did). Other chefs prefer to leave it intact to prevent it from releasing that gelatinous chemical, so they fry it, incorporate it into casseroles, or even add it into salads. Regardless of how it is consumed, the health benefits are the same. Okra has developed a reputation as a miracle food and a cure-all, and while it may not be truly magical, its nutritional properties are worth a taste.

1) Okra is thought to combat diabetes.
In 2012, roughly 10% of Americans had been diagnosed with diabetes, which makes it a tragically common chronic illness. Diabetes is also thought to be one of the most difficult to reverse, but okra is one of the few foods that has been shown to have a direct impact on the symptoms of this dreadful disease. Several studies done on diabetic rats showed that their blood glucose levels and triglycerides had dropped significantly once they consumed okra regularly for a couple weeks. One of these studies also showed that the seeds themselves had a more powerful effect on blood sugar than the seed pods, which is something to think about if you have diabetes.

2) Okra is a great source of dietary fiber.
A significant portion of Americans today suffer from a deficiency in dietary fiber, which can result in constipation, hemorrhoids, and other bowel problems. Increasing the amount of fiber in your diet is a great way to soften stools and help your digestive system run more smoothly, which will alleviate constipation and prevent hemorrhoids. In addition to the digestive benefits, fiber can aid in stabilizing blood sugar levels and preventing heart disease.

3) It is low on the glycemic index.
Okra has a glycemic index of about twenty, which means that it breaks down more slowly than other types of carbohydrates. This minimizes blood sugar spikes and keeps you full longer. The low glycemic index makes this food an excellent choice for people with diabetes, insulin problems, or anyone who is concerned with following a low glycemic diet.

4) Okra may help lower cholesterol.
The dietary fiber in all vegetables helps keep the cholesterol low, but okra has a more significant impact on cholesterol than most other vegetables. One study found that the extract of this plant may interfere with the production and absorption of cholesterol. 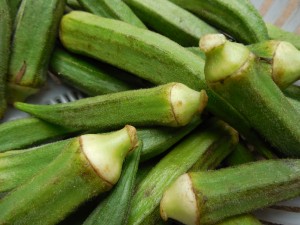 6) Okra is thought to help fight kidney disease.
Scientists in 2005 found that okra fights potentially deadly kidney disease. Regular consumption of this green vegetable was shown to greatly reduce signs of kidney damage compared both to control groups and to those who followed a diet plan tailored for diabetes.

7) Okra supports the respiratory system and fights diseases like asthma.
Okra is high in Vitamin C, which is known to help with common respiratory problems like asthma. One study showed that a diet containing sources of Vitamin C, even at fairly low levels, reduced coughing and wheezing during childhood– particularly among at-risk individuals, like those with childhood asthma.

8) It keeps skin looking healthy and youthful.
This can also be attributed to okra’s Vitamin C content. Vitamin C is vital in keeping the skin smooth, healthy and glowing because it is responsible for supporting growth and repair throughout the body. This key vitamin is vital in producing collagen, repairing damaged or dried skin, and ensuring beautiful, uniform skin pigmentation. Some people even boil and mash okra to use it as a moisturizing skin cream, but for the rejuvenating effect on the whole body, eating it is ideal.

9) Okra supports healthy pregnancies.
This is an ideal food for expecting mothers because it is high in folate, which is the most important B vitamin when it comes to producing and nurturing new cells. Folate has been shown to prevent birth defects and aid in fetal growth. Okra’s high Vitamin C content also helps strengthen the mother’s immune system during this vulnerable, often exhausting time.