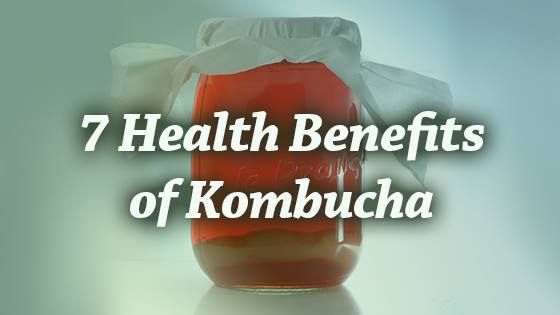 Those who frequent health food stores are probably quite familiar with kombucha tea, but the rest of us have only just started to see this alleged super food popping up on the shelves of grocery stores and supermarkets across the country. Whether it’s sold by itself, mixed with green juice or filled with floating chia seeds, the label makes the same impressive claims:

“Kombucha will eradicate cancer cells in the body!”

“Kombucha will cleanse/detoxify your digestive system!”

“Kombucha will help you live to reach 100 years old!”

…which all sounds great, but smart shoppers have learned to be skeptical of product labels, so these enthusiastic self-endorsements may have been enough to push you away. Now, however, it’s time to give this bizarre health drink a second look.

But let’s start at the beginning: where did kombucha come from?

Historians are not sure exactly when and where kombucha was first created, but current estimates point to China, where it has been consumed for over two thousand years. The first documented evidence of kombucha consumption was in 221 BC, when it was referred to as the ‘Tea of Immortality’ or the ‘Remedy for Immortality’. Naturally, a drink with that kind of reputation spread beyond the borders of China, and by 415 AD, it had spread to Japan and Russia. 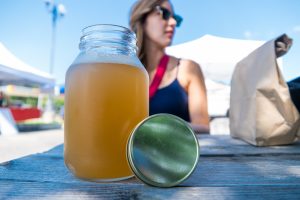 Legend has it that this is when we got the name ‘kombucha’—a Korean doctor by the name of Kombu nursed the emperor back to health using this drink. Whether due to gratitude or for the sake of simplicity, the emperor coined it ‘kombucha,’ combining his physician’s name with the Japanese word for ‘tea.’

Over the next several hundred years, it made its way into eastern Europe, particularly Germany, Poland and Denmark. By the late 1800s, it seemed to have disappeared, but a German doctor by the name of Rudolph Skelnar revived interest in kombucha after World War II, when he successfully used it to treat patients who suffered from chronic illnesses like cancer, diabetes, and high blood pressure. From there, its popularity ebbed and flowed over the years, but today we can find kombucha pretty much anywhere.

But what is kombucha? As you may have gathered skimming product labels, kombucha can be made from black, green or white tea. The tea is fermented for several days (usually around a week or more) with a mixture of sugar and fungal cultures, known affectionately as a ‘scoby.’ What’s a scoby? Why, a symbiotic culture of bacteria and yeast, of course! It looks like a brownish, gelatinous pancake. Some people compare the texture to a mushroom, but technically, it isn’t a fungus.

The scoby is a living, breathing, growing organism, and a single one can produce tea for several years. Some kombucha brewers claim that you can use one scoby forever as long as you peel off the oldest layers as it starts to age.

During fermentation, the little critters in the cultures digest the sugars in the tea. As they do this, they release a wide variety of ‘waste products’ which enhance the nutritional value of the tea: everything from enzymes to B vitamins to Vitamin C and amino acids. The yeast also produces a small amount of alcohol, but the bacteria beaks this alcohol down into a variety of organic acids. The alcohol content of kombucha is extremely low, which is why your local grocery store will sell it to you without asking for your ID.

Some home brewers like to add their own flavors to the tea, which can make it more interesting to drink regularly. Any caffeinated tea can be used to brew kombucha, which can alter the flavor, but even after the fermenting process is complete, many people like to experiment by infusing the drink with herbs, fruits or chia seeds.

So, in sum: drop the rubbery, beige, rather unappetizing-looking scoby into a bowl of sweetened tea, walk away for seven days, and kombucha is the result.

Now that you know a little bit about the history of kombucha and how it’s made, let’s get to the health effects.

If you were paying attention when I was explaining the process of making kombucha, you may have picked up on the word ‘fermentation.’ The scoby used to brew a batch of kombucha is a living thing, so it’s no surprise that most kombucha teas contain moderate amounts of good bacteria. There is huge amounts of anecdotal evidence in favor of the benefits of probiotics to a struggling digestive system—everything from relieving constipation and bloating to soothing acid indigestion. 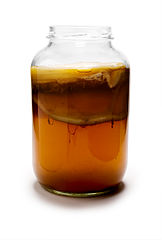 The probiotic compounds found in kombucha can help your digestion in a very literal way, too: the little critters will live inside your body and help you break down components of the food that you may not be able to digest on your own. We’re just learning about the many benefits of having a strong colony of gut bacteria, but the current research looks very promising.

Some people recommend drinking only raw kombucha, as pasteurization can reduce the number of surviving bacteria in the beverage. However, it is important to note that drinking unpasteurized kombucha also increases your risk of food poisoning.

Kombucha’s immunity-bolstering effect is due to a variety of factors. This drink is chock full of B Vitamins and the known cold-buster Vitamin C. The chemicals in kombucha are loaded with antioxidants which clear out dangerous free radicals, lower oxidative stress, and fight other immunosuppressive compounds in the body. All of this means that kombucha will help keep everything from colds to inflammatory/chronic illnesses at bay.

Joint health is on everybody’s radar now-a-days, and many people claim that the answer lies in eating cartilage or drinking bone broth. Kombucha is the way to look after your joints even if you’re trying to avoid animal protein. This drink is full of compounds called glucosamines, which aid the body in preserving collagen and minimizing pain due to joint damage and arthritis. These same glucosamines aid in cartilage production and in producing the fluid that lubricates your joints.

So much of the food we eat and the medicine we consume causes damage to the stomach lining, which can result in painful ulcers and inflammation. Fermented foods, including tea, have been shown to have a protective effect on the stomach lining, and one study even showed that kombucha was just as effective in healing stomach ulcers as the popular drug omeprazole, which is commonly used to treat acid reflux disease. This may be due to a combination of antioxidant and probiotic activity, which can balance the stomach pH and decrease the amount of stomach acid the body secretes. Many people claim that kombucha is a good fix for heartburn. 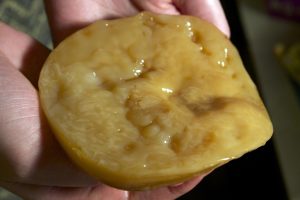 Iron deficiency and poor oxygenation leads to moodiness and chronic fatigue in a large number of adults. If you’re looking to combat the effects of iron deficiency, fermented tea may be a good thing to add to your arsenal. Fermentation frees up the iron found in black tea, which the body may struggle to absorb in unfermented tea. In addition, the high levels of antioxidants improve your body’s absorption of non-heme iron. A glass of kombucha with a serving of high-iron plant foods can put a huge dent in your iron needs.

Obesity is one of the biggest health problems in the western world today, and kombucha can be an invaluable tool to anyone trying to drop a couple pounds. One study performed in 2005 suggests that kombucha may boost your metabolism and reduce the amount of fat your body holds onto, preventing further weight gain. More studies are needed before doctors can start prescribing kombucha, but given its high levels of polyphenols and acetic acid (which have been shown to accelerate weight loss), things are looking good. Many people also find that kombucha aids in feelings of satiation and fullness, which helps them consume fewer calories in the form of unhealthy processed snacks.